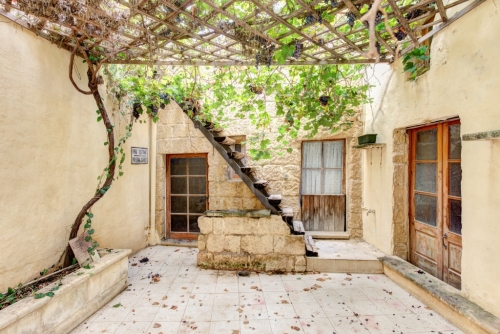 There is a lot of hype about the new fangled ways of making our homes environmentally friendly and of finding cost-effective methods of diminishing our water and electricity consumption bills. Yet, when looking at old Maltese houses, one remains impressed at how most of them were created with a great deal of insight into how architecture can turn a simple family home into a haven that beats all weather odds.

Take old farmhouses. The barren outside reveals a generously distributed inside. Generally the first thing you step upon passing the front door step is a small or large central open courtyard (Spanish hacienda style) out of which the entire house radiates into different rooms. The central courtyard provided fresh air to all the house. It also provided considerable shade from the walls that encircled the open enclave which was usually supplemented with a generous inclusion of foliage creepers and other greenery. The space was also excellent for keeping all the family’s animals and allowing free communication between different members of the family, whatever chores they were doing in the different parts of the house.

Every self-respecting farmhouse possessed its own deep water well which contained rainwater collected from the flat roof (or roofs) of the house. Wells were generally excavated out of rock and the more typical ones were bell-shaped, containing more water on the lower extremity. This meant that the water was not stored immediately under the house’s foundations but deeper down beneath the rock which supported the foundations themselves.

Roofs were covered in solidly packed layers of hand-crushed clay particles that created a superb insulation from the scorching rays of the sun whilst maintaining impermeability to safeguard the roof’s security and stability. Ceilings were very high which meant that hot summer air could rise up, leaving a semblance of cool lower down in the room. Walls in farmhouses were exceptionally thick. This made rooms  well insulated one from the other, keeping the noise under control. Something else which thick walls controlled was the heat of the summer season, whilst maintaining the warmth indoors during winter. Windows were small and peeked out from the thick walls to filter sunshine. No large windows were allowed to bring in the sunshine for the old Maltese folks… they had enough sunshine to contend with in the fields each day.

Moving out of the countryside and into the village cores, we can check out the town houses or small palazzos. Again, roofs were constructed in much the same method up until WWII or therabouts. Ceilings were also very high and wells very deep and large to contain the large quantities of rainwater from the generally larger roofs. Windows were larger, long and narrow since town houses were rarely detached and mostly looked out onto alleys or narrow village streets. However they were covered with wooden louvres that filtered sunshine perfectly. Front doors were majestic yet did not introduce one directly into the house. They opened onto a glass door known as an ‘antiporta’ that again, let in the light but allowed nobody in. During bad weather, the ‘antiporta’ served as a second barrier to the great outdoors.

If you check each and every room in a town house, you will notice a screened ventilation vent in the upper corner of one wall. This vent  was generally connected to the roof on the upper floor and to the outdoors in the ground floor. The vent served the purpose of aerating the room even when all windows and doors were closed – a superb way of countering off humidity and mould. External walls always had a double strata of stone bricks in order to maintain heat and cold out. This was especially so on the front and back of the house and on the side if this was exposed to the elements.

The courtyard was still a central focal point but was shoved further back on the ground floor level, generally leading out of the hallway and on to the garden. Smaller town houses had a reverse method of installing a courtyard at the back of the house which however was preceded by a ‘loggia’ or covered glassed space that was excellent for bringing in the light without being completely ‘outdoors’

A neat method of bringing in light without taking the town houses occupants outside was via the wooden balcony, traditional, spacious and a welcome step towards the external world. Screened, veiled and as cosy as its owners needed to make it, it served several purposes – conservatory, storage, clothes drying, people watching, festa watching, etc

Once you know all this about old Maltese houses, chances are you will respect them and their builders that much more.

This article was written by Marika Azzopardi, a freelance writer and journalist. A frequent contributor to national English language papers and magazines, she writes about a bevy of topics including art, people and life in general. She is also the author of children’s books and short stories, delving into adult fiction from time to time.