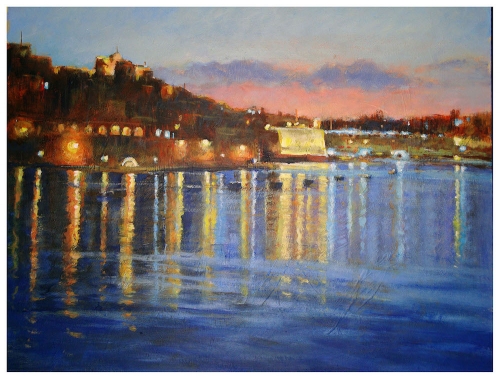 There are varied ways in which one can choose to paint Malta with diverse perspectives being adopted according to each artist’s personal inclination. The work of artist C.S.Lawrence has included a huge chunk of artwork inspired by typical Maltese characteristics that help to render the island and several of its key locations that much more unique.

The artistic work of C.S.Lawrence has become a constant presence within local artistic events and she has contributed to the local art scene with her regular participation in collectives and her personal collections being exhibited in public. It helps to understand something of the artist’s background, especially since her background is so variegated and steeped in cultural uniqueness.

“My paternal grandparents originated from Malta. They emigrated to Port Said in Egypt during the early 1900s and my father was born there. When my father was working in Dubai in the ’70s, he bought a house in Malta and we would regularly come here on vacation. During my childhood I lived in Nairobi, Mombasa and the Middle East but also in Surrey, England. When I decided to move from the Middle East to Malta in 2000, I began the process of applying for a Maltese citizenship which I ultimately acquired. It was during this procedure and the procurement of all the necessary paperwork, that I discovered how my paternal roots lay in Bormla alias Cospicua as it is also known. Largely on account of that I decided to settle and open up an art studio in Bormla.”

Being one of the Three Cities, Bormla offers the artist plenty of inspiration to paint the several seascapes which characterise her work. Whilst the sea is much loved by her as well as all variations of blue, Caroline claims it is also the architecture and ambiance of the historic areas of the Three Cities, Valletta  and Mdina which excite her, apart of course from the stunning colours of the rocky coastline of the island.

A widely travelled person, she must have visited many a tantalizing location. So what magical aspect of Malta  inspired her to choose it and stay on permanently? “In spite of all the damage I have seen being done to the urban areas of Malta, still Malta remains a fantastic place to live. Particularly for an artist. Particularly for an artist living in the Three Cities. It’s magical. The colours of the land and the sea continually inspire me. I have spent most of my life living near the sea and I fully intend to spend the rest of my life doing the same. I think the sea has a very calming effect and encourages a contemplative mood which helps one to detox the mind of all the stresses and strains that daily life exacts on us and in so doing, keep in perspective what’s important in one’s life.”

Whilst admitting that her favourite scenic spot is The Grand Harbour, Caroline S.Lawrence admits she would definitely change all the ugly matchbox-like, built-up areas of Malta’s towns and villages, because they do not respect Malta’s rich architectural heritage. “On the other hand, I would you never change the Grand Harbour region of the Three Cities and Valletta, because each corner of this part of the island is a living, breathing museum of invaluable wealth, both from an historical as well as a cultural perspective. These cities are testimonials to Malta’s rich history and heritage.”

The artist is currently building up a collection of  paintings in which she wants to merge her fascination of street art, urban wear and tear, with iconic images that capture the essence of the subject. “In my new paintings of Valletta I want to incorporate all the things that I identify with Valletta: the long steep stepped lanes, the ornate church facades with their statues standing in niches, street corner statues, beautiful old faded shop signs, cafe life….”